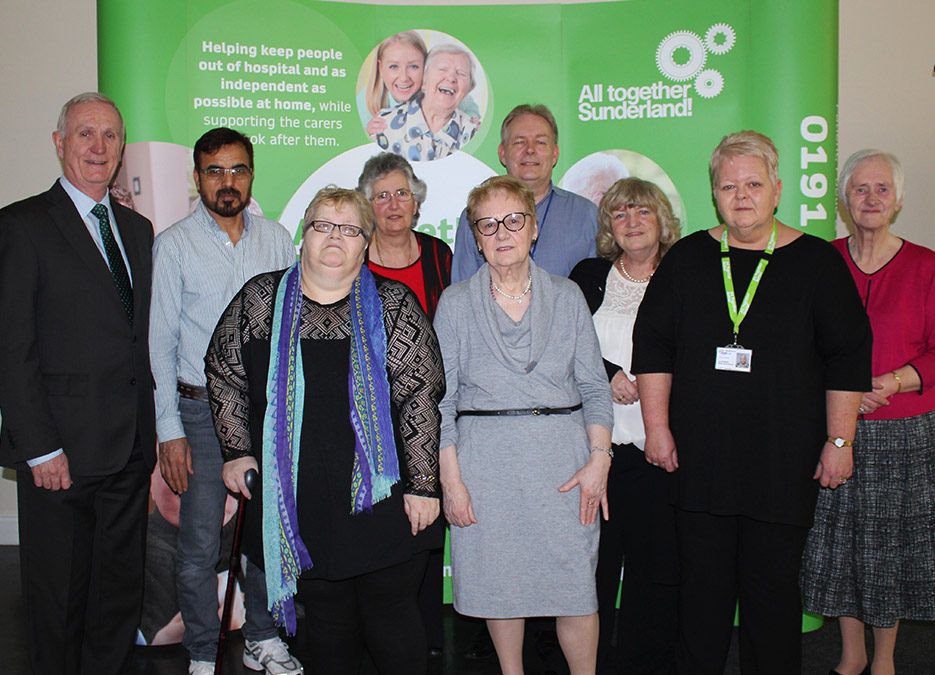 Volunteers who have helped to spread the word about a life-changing Sunderland service have been recognised at an event held this month.

Community champions, who have given up their time to help share their knowledge about All Together Better – a Sunderland based ‘vanguard’ programme, which has seen health and social care teams come together to improve support for some of the most vulnerable people in the city – enjoyed a celebration event, which acknowledged the contribution they have made to raising awareness of the programme.

The event, which took place at Bede Tower, just off Ryhope Road, was organised by Age UK Sunderland – one of the voluntary-sector and local support organisations working with health and social care colleagues as part of All Together Better.

The dedicated team of ten ambassadors, who signed up to support on a voluntary basis and talk to their friends and networks about the programme, have been helping to ensure that more people know about the joined-up way of working.  The Champions were given information and training about changes to Sunderland’s care delivery before heading out to various community groups and events to spread the word, as well as sharing their knowledge with their own friends and neighbours.

Mike Lowthian, patient, public and carer engagement coordinator for All Together Better, said: “It was really lovely to hold an event that recognises the fantastic work of our All Together Better Champions, who have worked so hard in their communities to spread the word about the changes underway in health and social care for some of the city’s most unwell people.

“The work of volunteers is absolutely incredible, and we wanted to find a way of thanking them for their efforts, as their course comes to an end.  It was a great afternoon for all of our advocates.”

The Champions were each given an award for their work in reaching out to people in their respective communities to tell them about All Together Better, which was launched in 2015 to tackle pressures on the health service, and in Sunderland’s case to reduce the impact of the three per cent of the city’s population that currently uses over 50 per cent of resources.

All Together Better brings together professionals from health and social care, to deliver person-centred support in @SunderlandUK. Visit our shiny new website to learn more about what the alliance has in store... atbsunderland.org.uk pic.twitter.com/rfjX…

Our operational plan for 2019/20 sets out how we will deliver high quality and sustainable services and lays the groundwork for the transformation of how we deliver health and social care across @SunderlandUK. To see what it has in store, visit... atbsunderland.org.uk… pic.twitter.com/YfBq…

All Together Better was established to oversee community based health care services for adults in @SunderlandUK. Interested in finding out more about the model and how it works? If so, visit our new website for further information... atbsunderland.org.uk pic.twitter.com/M8su…

All Together Better brings together professionals from health and social care, to deliver person-centred support in Sunderland. Visit our shiny new website - atbsunderland.org.uk - to learn more about the Alliance pic.twitter.com/Qhrt…