Life is All Together Better for Ken 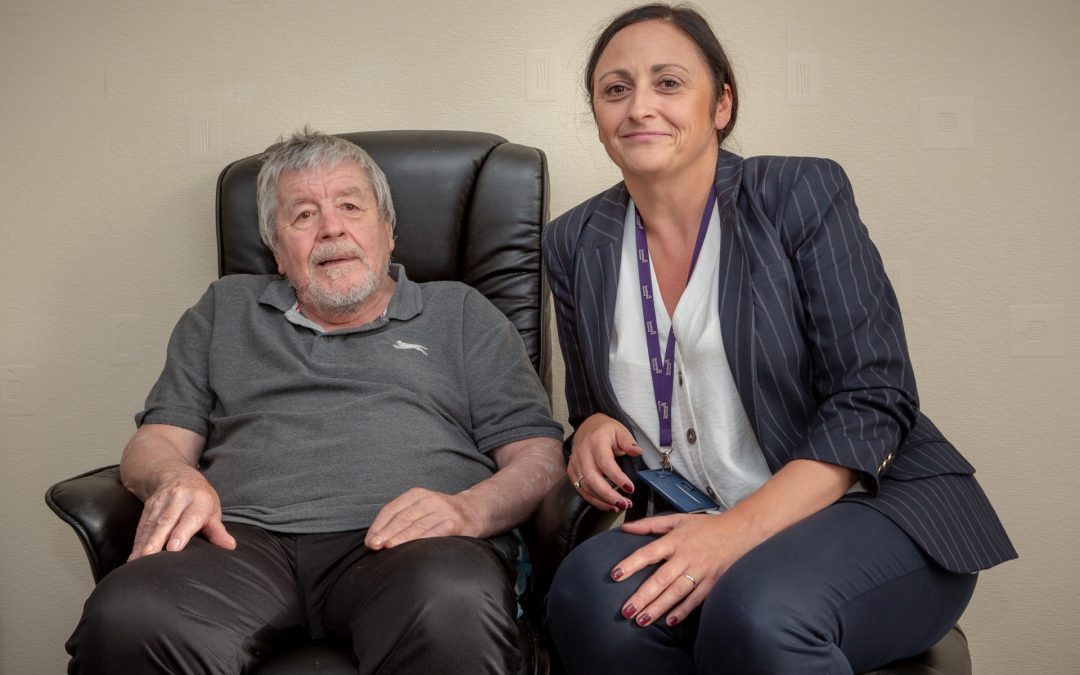 A Washington man has been given a new lease of life, thanks to a joined-up team of health and social care workers.

Life for Ken Murray, 74, has been transformed – from an existence once characterised by loneliness and poor living conditions, to one filled with pride and happiness.

Mr Murray’s life had spiralled following a series of personal and professional set-backs, but support from a social care worker, and a number of organisations in the city, has helped turn things around – easing pressure on resources that were once focused on ‘relieving symptoms rather than dealing with the cause’.

Lesley Howell, a Senior Social Worker with Sunderland City Council, led the team helping to transform Ken’s quality of life after being introduced to the former factory foreman in May.

Lesley said: “When I first met Ken, it was clear that he was somebody who had fallen through the net – a number of issues had been allowed to multiply and his life had fallen out of control. His health – mentally and physically – was suffering, and it was putting huge pressure on a number of teams’ resources who were dealing with the outcome, rather than addressing the root cause.

“What Ken needed was a holistic approach to stop the downward spiral and get him back on his feet again.”

As part of an integrated team, Lesley set about bringing together a range of professionals from healthcare to support, as well as a number of organisations that could make a difference.

“I’m part of a team that was brought together with healthcare professionals as part of the All Together Better care model, that aims to provide better care for Sunderland’s most vulnerable residents,” said Lesley.

“It unites teams of professionals from health, social and local support organisations, helping the city’s residents live independently with the right support wrapped around them. In Ken’s case, we knew that this help, and more, was necessary.”

Ken struggled to take pride in himself or his home. Complicated by previous health issues, and a lack of support in dealing with them, he was also heavily reliant on support from A&E.

Recognising the need to wipe the slate clean, Lesley and her colleagues dedicated their personal time to improving Ken’s living conditions.

“We started by clearing out the entire house,” said Lesley. “The team worked around the clock, coming along on their lunch breaks and after work.  The Community Occupational Therapy Team installed a level access shower, Sunderland City Council’s financial Team ensured Ken was claiming the correct benefits.  His curtains were replaced along with his flooring and doors, this started to create a lighter, brighter, clean environment for Ken.

“We also made sure he had clothes that fit him, which helped improve his own self-esteem and his relationship with his neighbours, allowing them to see Ken in a new light. It wasn’t just about cleaning a house – it was about Ken; we had to ensure he was getting access to the correct support and care to make sure the changes support him to make a new life for himself.”

All Together Better’s model sees different services providing ‘combined care’ to ensure the people they look after receive the right support to restore their independence.

Ken now receives regular care consultations, visitors to his house and goes on regular day trips with some of the groups he has joined, including outings to Holy Island, Redcar and Seahouses.  The level of support offered will be adapted to meet Ken’s needs, meaning it will reduce as he becomes more independent.

Lesley said: “We’ve all really taken Ken into our hearts and it’s been so rewarding to see the turnaround in him. We continue to visit him, help him to budget his money. He also has regular visits from community nurses, and we work very closely with his housing provider, Gentoo, who have been incredibly supportive since we began this process.

“It’s truly rewarding to see that Ken has a new lease of life now – he’s happy, healthy and has a whole new outlook.”

Ken said: “I can’t begin to describe just how helpful All Together Better have been, they’ve really done wonders for me and my self-esteem.

“If you’re right down at the bottom, like I was, they’ll do their utmost to give you as much help as they possibly can.  The support they offered me has been life-changing.”

He added: “My advice for anyone in my position and who needs care is not to think you have to do it alone. There’s help there, so use it to your advantage and once you’re up and on your feet, you will be able to stay there.

“They [All Together Better] really make you feel wanted. It’s about improving your wellness and wellbeing and I can’t thank them enough for the support they’ve given me.”

Crucially, the work of All Together Better has also helped alleviate the additional pressure Ken placed on the NHS.

“In the 18 months prior to the team getting involved, Ken had been to A&E 33 times – unfortunately, he wasn’t using NHS resources in the right way,” added Lesley. “Since we stepped in, he has been only once, which was due to genuine medical emergency. We now organise hospital appointments for him, and so we haven’t just helped Ken, we’ve helped ensure the NHS is being used responsibly and that resources are directed to those who really need that emergency help.”

Wayne Scott, an Adult Social Care Manager who is also part of Lesley’s team and the All Together Better community integrated team in Washington, said: “The whole team rallied to help Ken restore his sense of pride. Ken’s total transformation is testimony to the work of All Together Better and its partners, as well as other organisations who have come together, and I’m very proud of what our team has accomplished.”

One partner that has been instrumental in Ken’s turnaround is Synergy Homecare, which provides paid care support to people across the city. Wayne added: “The team there really went above and beyond to provide extra care for Ken, and have been a tremendous help. They are a homecare agency who provide regular care for Ken, seeing him during the week, at the weekends and taking care of his housework.

“Without our intervention and everyone’s help, I’m almost certain that life for Ken wouldn’t have changed. The spiral he was in might have seen him lose everything, which would have been a terrible outcome,” added Wayne. “But with the support of All Together Better and our colleagues from other support organisations, Ken is now looking forward to a happier, more positive future.”

June Huntley, manager at Synergy Homecare Washington, said: “Ken has been a delight to work with and is very well thought of by all of the team here at Synergy. The home care plan we’ve implemented means he receives four visits a day from our carers and is able to continue living amongst the local community which he values so much.

“Prior to this support, Ken was constantly in and out of hospital and his health was deteriorating. Now, thanks to the work of Synergy, All Together Better and Sunderland City Council, our carers are always on hand to ensure his nutrition is satisfactory, he is taking his medication and even to help him with his shopping when needed.

“He has re-found his pride and it’s fantastic to see the impact the support has had, it’s truly lifechanging.”

Patients over the age of 50 are benefitting from a new service that provides additional support for up to six weeks following discharge from Sunderland Royal Hospital 🏥. Find out more here: 👉 bit.ly/3N5kOlK

Do you care for a loved one? Have you recently been involved in their discharge from hospital? 🏥 If you have, then @STSFTrust wants to hear from you. This is a great opportunity to have your say 🗣 Take the survey below 👇 Please share: @HWSunderland @SunderlandCCG twitter.com/STSFTrus…

Are you ready for a Royal celebration? 👑 Don’t forget there is an extra bank holiday this year! Don’t get caught out... ✅ Order your repeat prescriptions in plenty of time ✅ Keep a well-stocked medicine cabinet Find your nearest pharmacy here - bit.ly/3u33Vjl pic.twitter.com/OAJg…

👋 Meet Rachel Daurat, System Coordinator for Sunderland. Rachel's role is a 'system leadership role' - developing a shared system view of hospital discharge, holding all parts of the system to account and driving action. Find out more about her here 👉bit.ly/3N2XeG7 pic.twitter.com/hx2y…

It's estimated that up to one in four new and expectant mums are affected by perinatal mental health problems 🙁 which is why the new Maternal Mental Health Service, delivered by @STSFTrust is so important 🤰 #MentalHealthAwarenessWeek Find out more here: stsft.nhs.uk/service… pic.twitter.com/AA7U…