A pioneering service is being championed by a carer who has rebuilt his life with the help of its support.

A 42-year old Grindon man who has spent years feeling isolated and alone while caring for his frail dad, praised a service that has helped him reclaim his social life.

Alan*, whose life had slipped into a daily routine revolving around his dad, George, has been supported by, thanks to new Care Locality Leads from Sunderland Carers’ Centre.  Part of All Together Better, the Carer Locality Leads work in new Community Integrated Teams along with health and social care professionals.  Together they focus on the needs of both people who need the most direct support and, importantly those who look after them in a caring role..

Alan’s dad lives with a combination of debilitating conditions including arthritis and Parkinson’s Disease, which resulted in him needing round-the-clock support to help with basic personal care, cooking, eating and drinking, shopping and emotional support. 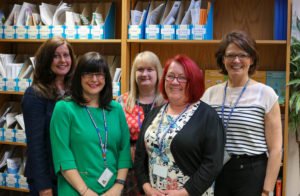 As one of the frailest members of the community, George’s health and social needs are met by a joined-up team of professionals, who are part of the All Together Better programme, which was set up to provide person-centred support to those who need most care.  The programme also focuses on the needs of carers, who play a vital role in maintaining the independence of the vulnerable in society – and it was identified that Alan was under considerable pressure as result of his caring duties.

Alan said: “I just saw it as looking after my dad, so I never thought as myself as a carer.

“But I did feel that my own quality of life was slipping away and the pressure was impacting on my own health.  I didn’t really want to moan, because I know that my dad is in a far worse position and I want to help him, but the local carer locality lead made me see that I have to remember to look after my own health and wellbeing too.

“The support they have given means I am now able to think about returning to work part-time, because of the adaptations to my dad’s home, and the fact that I know there is a team around to provide community-based care if he needs it.”

Alan had given up work, as it was no longer possible to have a job during the day, which juggling care for his dad, which saw him there 24/7.  He was not accessing any of the financial benefits available to him as a carer, and lost his social life, after giving up work and spending days and nights providing care.

Andrea Lanaghan, who is a Care Locality Lead in the West of Sunderland, said: “I was able to talk Alan through the support available to him, from Carers Allowance and Attendance Allowance to take the financial strain away, to a Care Needs Assessment to look at adaptations to improve George’s home and make life easier.

“As George was only recently diagnosed with Parkinson’s Disease, it was also possible for us to talk Alan through the condition and provide practical advice on how to deal with it effectively.

“Because we have a multi-disciplinary team of people providing care for George in the community, we were able to feed into discussions by the Community Integrated Team about Alan, as his dad’s main carer, ensuring the whole team were aware of the pressure he was facing, and his plans for the future.”

She added: “By looking at George holistically, including the role that Alan plays in supporting him, we are able to deliver the right care and to recognise the vulnerabilities of carers, who – if not looked after – can see both themselves and their loved one become unwell.”

The new locality leads work as part of All Together Better, a new initiative that looks at how bringing teams of health and social care professionals together, alongside local support organisations, can deliver better care for those who need it most in Sunderland.  To find out more visit www.atbsunderland.org.uk

*Not his real name

Don’t let the thought of cancer play on your mind. If something in your body doesn’t feel right, talk to your GP. Most people who go for tests find out it’s not cancer. Finding out sooner is always better. Contact your GP practice pic.twitter.com/3XwK…

Living with a health condition means how you feel can change from day to day. Listen to your body and do what feels comfortable. Visit weareundefeatable.co… to find ways to get moving that work for you. #wearenundefeatable pic.twitter.com/M5FP…

111 online can help you if you have a medical problem and you don't know what to do. Visit 111.nhs.uk #HelpUsHelpYou pic.twitter.com/60iZ…

Nappy rashes and toothache, coughs and sneezes, tummy bugs and temperatures 🤒 They’re all in The Little Orange Book, your NHS go-to guide if you’re caring for a poorly baby or child under 5. Download yours now 👉 bit.ly/380jMYV pic.twitter.com/NLmL…

The early signs of a heart attack 💔 can include squeezing across the chest and a feeling of unease. ☎️It’s never too early to call 999 and describe your symptoms. #HelpUsHelpYou pic.twitter.com/rqjV…